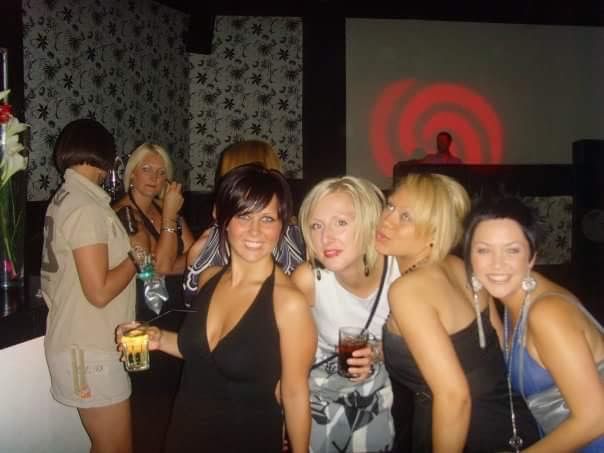 I have lived mainly a good life. But there has been times where I’ve hit a real low.But I’ve got through it and its made me the person I am today.

I have incredible kids that I absolutely adore and who have changed me from being a selfish , short tempered party girl to a laid back , not so selfish (still a little in some things) party girl.

I started going out to pubs and clubs when I was 16 we’d have a few drinks at home get the bus into town with a Childs ticket and then go to a bar or club. My first outfit consisted of clothes that made me look like a next office mannequin (because I thought It made me look older). After a couple of weeks I met a guy who ended up being my first long term boyfriend. He did think I was 18 as I met him in a club but eventually i dropped myself in it by naming all my GCSES  instead of just a couple of a levels. We stayed together for 5 years and we had some amazing times , amazing holidays a nice house on paper we looked like we had everything. The thing that a lot of people didn’t know was what I went through. I had a job in a salon at the time which wasn’t great money but Ive always loved my job so I stuck at it. But when I got paid each Saturday I use’t to give my money to my boyfriend and he would give me an allowance on what I could have. If I ever really wanted something don’t get me wrong he brought it me but I had to ask.

Next I wanted to drive but I got told there was no need for me to drive as he drove and he would take me where ever or I could get the bus. Then I wasn’t allowed to see some of my lad mates that I had been friends with for years. I only went out if he was there and if I wanted to go out on my own I either had days/weeks of the lead up getting moaned at or texts all night till I’d end up going home. Things over time got worse my friends hated him and told me to end things I was seeing my friends less and less I was seeing my family less. I was literally going to work going home and the only time I left was when I was with him. I didn’t have my own money because he was still taking all my wages and my confidence was getting lower and lower. Every time he had a drink he would tell me I was fat and ugly and it was only him who wanted me.

Our relationship ended when I found out I was pregnant after 4 years of being together I was over the moon, when I told him it wasn’t the reaction I was expecting, He told me to have an abortion I was devastated it ripped out my heart. We went back and forth for a couple of weeks and argued over what we both wanted but the decision was taken out of our hands. I found blood when I went to the toilet. When we finally got a scan at the hospital what should of been a baby of 14 weeks was more like 6 and it had no heart beat. I took it really hard and I had no support at home I think it was just an easy way out for him. I started to distance myself I was devastated from losing a baby which I wanted and being torn apart from the man I loved ,I didn’t realise the control he had over me I thought this was normal as it was my first proper relationship and it happened so gradual I didn’t even notice.

6 months went by and I started getting in contact with friends I had lost to re build my friendships I knew I needed to get out but I was scared. The last straw was when I had my first night out after a couple of years of not seeing them and recieving texts all night telling me it was going to be over if I didn’t come home. I was sat in the toilets of the club crying , I rang my mum and told her I was leaving I was terrified but knew It was time I was young and just couldn’t do it anymore. I stayed at a friends that night that I knew he wouldn’t know where I was and went and got my stuff the next morning before work. I felt instantly like a weight had been lifted.

Abuse can happen in different ways and I never realised for years that what was happening was emotional abuse with the control he had over me. But it was apart of my life that has made me the person I am today and helps me talk to the kids I teach when they say about boyfriends as I was their age when I met him. Me and him sometimes talk now and we actually get on and I still see his family but were older and I’m a hell of a lot stronger. Please if you have any of these signs start showing stop and think about your life and where you want it to be, Things could get worse I was lucky it didn’t.